How is Swing Dancing Defined?

Swing dancing is defined as the family of dances that came about during the Harlem Renaissance in the 1920’s. It takes elements from several types of dances including tap, the Breakaway, and jazz and combines those types with contemporary constricted rhythms. This type of dance became much more prevalent in society after it was unexpectedly features in a 1994 GAP commercial.  Over the years, swing dancing has evolved into several different variables that can be seen below.

The History of Swing Dancing 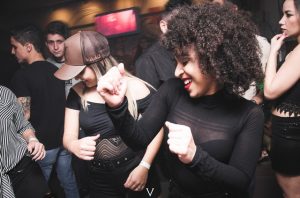 So if Travolta didn’t invent it, where did it begin? As mentioned above, the birth of the dance movement of Swing began with its creation in the 1920’s and 30’s America, when a new style of jazz plus Big Bands bolstered by trumpet and horn sections energized pop culture into a footloose frenzy. Conceived in New York’s Harlem African-American district in the late 1920s, an exciting development of jazz broke out in the clubs like wildfire when musicians combined jazz in a new sound and alongside it, a new dance was born called the Lindy Hop, coined from dancers imitating other dance step rages of the time, including the Charleston and the Foxtrot.

The Lindy Hop was quick and precise, with a series of intricate steps to match the music being played by the big bands. Dancers, known as ‘jitterbugs’ bounced and hummed on the floor, rubbing elbows with one another as the Bass player plucked and the drums tinned as smoky halls packed with couples shuffled non-stop, whirling and kicking to the rhythm.  As the music gained popularity, small clubs and local venues became packed with people on Friday and Saturday nights, and bands became smaller as the dancing further evolved to match the new styles.

Over the next 30 years, the dance changed and would be rearranged and renamed as the Jitterbug, Boogie Woogie, and even Rock ’N’ Roll. With the new waves of Rock and Psychedelic Blues in the 1960’s emerging, partner dancing faded from the dance halls and popularity until the 1980’s when it reappeared in France, known as French Jive, where it again spread and became a hit in the UK and the USA along with a hot revival of social dancers throwing Swing parties and signing up to attend  dance lessons since the 1990’s until today.

This dance is frequently referred to as Triple Step swing due to the rhythm of the basic triple step. This dance consists of six and eight count patterns, which require a rock step back by both man and woman to begin. It is a circular dance that is danced with a bounce and is very grounded and not high in the legs. This bounce requires the dancer to stay very smooth and not jump around much. East Coast swing is the base for all swing dances.

This dance consists of six and eight count patterns, which are done in a slot. The woman no longer rocks back as in East Coast swing, but instead she always walks forward on count one. This dance is usually done to medium tempo swing music, frequently slower than East Coast swing. However, those who achieve a high skill level in this dance can and do dance it to faster tempo music. This dance has no bounce and a very smooth feel. Rarely will you see high kicks or moves which require the dancer to leave the floor.

The Hustle (Disco) is a member of the Swing family, and is like the West Coast Swing in pattern. It has a distinct flavor, utilizing Disco style music & revived partner style among nightclub dancers in the 1970’s. Hustle is danced to the contemporary pop dance music of the last 20 years. It is a fast, smooth dance, with the lady spinning almost constantly, while her partner draws her close and sends her away.

This dance is the European version of East Coast swing. Six and eight count patterns make up this dance, as in East Coast swing but it is quite bouncy with very sharp kicks and flicks. Unlike East Coast swing, Jive is danced to a faster tempo swing music and is meant for competitive style dancing.

If you’ve always wanted to learn to swing, you’ll love our dance classes! Give us a call at (919) 489-4313 or fill out the contact form below to schedule your first lesson! (New to Fred Astaire Dance Studio in Durham? Take advantage of our new student special!)